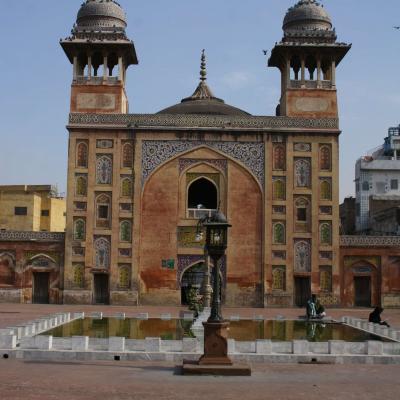 As per inscriptions –this exquisite mosque was founded in 1041 AH/1634 AD by Hakim Ali-ud Din Ansari entitled Nawab Wazir Khan, native of Chiniot, district Jhang, a viceroy of Punjab during the reign of 5th Mughal Emperor, Shahjahan. He was one of the most entrusted physicians of the prince Khurram (Shahjahan).

Wazir Khan Mosque presents a unique phase of art of decoration in Mughal architecture, especially the variegated glazed tile mosaic work apparently introduced from 16th century’s Shahjahan Masjid in Thatta, Sindh. It is rightly said that such is the variety of designs both in enameled mosaic work and fresco paintings, a school of art and design in itself. The imposing east doorway, a lofty eiwan with its decorative muqarnas semi-domical roof, flanked by decorative oriel-like projecting balconies on the upper level, summons into an octagonal vestibule an open courtyard measuring 160 x 130 feet. The courtyard enclosed by the praying chamber on the west and study cloisters for religious scholars on the north and south, and the deorhi with entrance cubicles on the east.  The arrangement of the 5-bay single aisle prayer chamber 130 feet long encased by simple cusped arches carried on deep piers, remind the Maryam Zamani or Begam Shahi mosque. The central gunmbad, rising higher than others, accents the elegantly detailed Mehrab, the impressive double dome carrying the voice of the Immam to the extremity of the entire courtyard. The arrangements of Qalib Kari are used in large as well as intricate beehive patterns, giving a special touch to the building. Its octagonal minarets rising to a height over 100 feet and defining the four corners of the courtyard consist of several stages and are capped with kiosks terminated with fluted cupolas, all profusely decorated with the tile mosaic.
The best calligraphy by well known Khattats (master calligraphers) in rendering verses from the Holy Quran and Persian poetry in elegant Nastaliq, Naskh and Tughra forms treat to eyes. The extraordinary blend of calligraphy, geometric forms and floral decoration along with large-scale Kashi Kari (tile work) fresco painting, stone and Chuna decoration with Taza Kari (brick outline fresco) lends an outstanding status for the building. In the basement of the courtyard of the mosque is situated the shrine of Syed Muhammad Ishaq Gazuni, since Wazir Khan incorporated it in the design of the grand mosque.