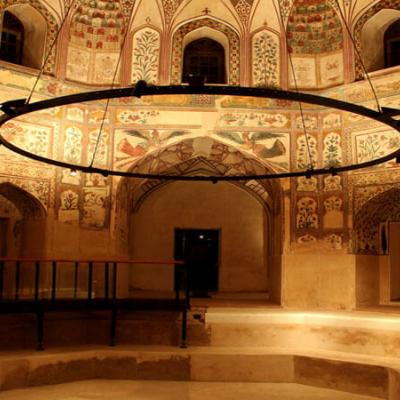 Wazir Khan’s Hammam is situated in side Delhi Gate Chowk Wazir Khan at Lahore. The complex was built by Sheikh Ilmud-din Ansari entitled Wazir Khan, a native of Chiniot, who founded the splendid mosque known after his name in the Lahore city. The Hammam is surrounded by shops on its north south and west, while the eastern side is occupied by the Delhi gate. The interior structure of the hamman is today utilized by the Lahore Municipal Corporation for a children school, dispensary and offices of the Health Department.

The hammam is a single storey structure, of imposing extent plan and proportion covering a total area of 1110 sft. It consists of only one structure of two blocks different in planning and sqparated by a passage.

Wazir Khan hammam is built of small size bricks as used in Mughal period buildings in the city of Lahore, with lime mixed with small pebbles and fragments of bricks as bonding material. The northern half of the western façade, including the main entrance, shoes the original exterior of the hammam. The exterior has indeed a character peculiarly of its own, for it is of cut and dressed bricks and with regular rectangular recessed panels. The parapet wall shows zanjira type continuous decoration in relief. The north eastern and north western angles of the building still retain the semi-octagonal guldastas. The hammam has twelve domes and one semi-dome of the main entrance. The grouping of three small domes on each side of the high dome of the octagonal hall of the northern block is very effective. The dome of the octagonal hall of the northern block is a compounded type of dome as it is raised on a high drum pierced with windows.