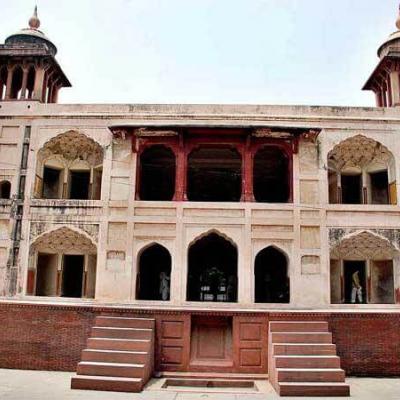 The square edifice known as Wazir Khan’s Baradari, is a beautiful specimen of civic architecture belonging to the Mughal style of Shah Jahan’s days. Built in about 1635 A.D by Hakim Shaikh Ilumddin Ansari, entitled Wazir Khan, a Minister and Governor of the Punjab during the reign of Emperor Shah Jahan (1628-58 A.D). The existing building stands at the back of the Lahore Museum, now isolated from its original garden environment.

The ‘Baradari’ has twelve arched openings, three on each side, and adorned with four corner cupolas. The main chamber is surrounded by four “Peash-e-Salans” and was once crowned by a high dome which has disappeared since long. The interior was originally decorated with fresco paneling dome in multicolours, producing a pleasing effect in harmony with the picturesque surroundings of a spacious “date garden” called ‘Nakhliya” which has since disappeared.

During the Sikh period, it became a part of their Cantonment. It continued to serve as soldier’s quarters during the British period till the cantonment was shifted from Lahore. It was then used as Settlement and Telegraph Office and later on, remained part of the Museum for sometime. It was also used to house a part of the Punjab Public Library, Lahore