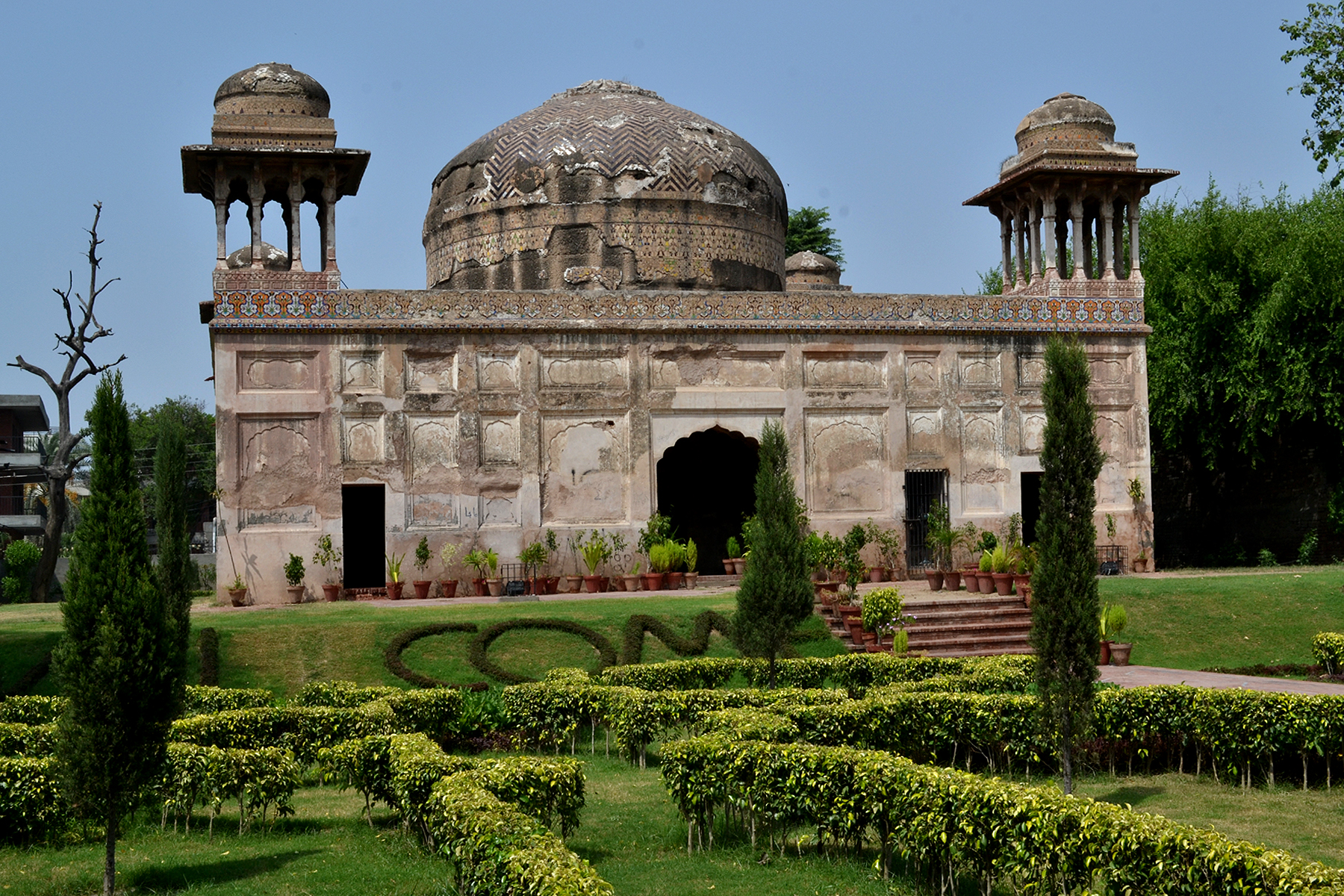 History of Site/ Monument: - While going towards Shalimar Gardens from railway station, on the left side of G.T road, next to the UET, there is a quite visible magnificent gateway (Gulabi Bagh Gateway). The gateway aperture frames the monument known as Dai Anga’s tomb. In this spectacular tomb, mortal remains of Dai Anga, the wet nurse of Mughal Emperor Shahajahan and his daughter Shahzadi Sultan Begam are buried. Dai Anga was wife of Murad Khan, a Magistrate in Mughal court. She was founder of Dai Anga’s Mosque, one of the well-known ancient mosques of Lahore.
Present Condition (Exterior & Interior):- The custodians have been paying regular attention to the restoration and conservation of this monument; therefore it is in a good state. Its integrity has been compromised, by handing over its administration to the PHA.  The PHA authorities have developed a garden without following any Mughal pattern of plantation and garden traditions. Electricity connections provided with in the tomb building have also damaged the authenticity of the monument.  Generally monument building is in a good condition.
Decorative motives/ important features: - It is slightly squat looking square building raised on a plinth. The tomb structure is crowned with a low leaning single dome, placed on an elevated drum. The corners of the roof top are highlighted by providing pavilion- like square kiosks, those also supporting chajjas (eaves) and cupolas.  Most of the decorations of building are disappeared but at some spots specimen of original tile mosaic can be observed on the parapet. Internally the building was embellished with fresco paintings which still surviving in the squinches above the projecting beehive-like decorative muqarna, along with a star-net dome treatment. The base of the squinches is encircled with inscriptional panels from Holy Quran, rendered in elegant calligraphy by Muhammad Saleh, mentioning the date 1082 A.H (1671 A.D).The tomb comprises of a main tomb chamber and eight interconnected rooms around it. There is no sign of original cenotaphs at present but brick structure marking the place.

History of Site/ Monument: - There is an impressive structure of considerable height of a double storey building on the location, known as Gulabi Bagh Gateway. It is evident from its nomenclature that this was an entrance to a rose garden (Gulabi Bagh), the title Gulabi Bagh occurs in the last line of the inscription over the archway which not only describes the kind of the garden but also as a chronogram gives the date of its construction,1657 A.D. The Gulabi Bagh was constructed by or in the memory of Mirza Sultan Baig, a Persian nobleman and cousin of Shahjahan,s son –in-law Mirza Ghiyas-ud- Din (married to princess Sultan Begam). Mirza Sultan Baig was Ameer-ul- Bahr (Admiral of fleet) in the court of Shahajahan. It is said that in 1657 A.D. while on a hunting excursion to the royal hunting reserve (kamargah) at Hiran Minar near Sheikhupura, he died of the firearm (an English rifle), presented to him by the emperor, due to bursting of a shell during hunting.
Present Condition (Exterior & Interior: - The gateway seems to have lost much of its interior and exterior decorations but still in a tolerably well- preserved condition.
Decorative motives/ important features: - A lofty Mughal style iwan rises to two storey height incorporating a 40 feet long covered walkway defined by a single storey cusped arch gateway. The iwan is flanked on both sides with 05 feet cavernous arched alcoves. The covered walkway is lined on either side with a12 x 12 feet chamber, of course for the accommodation of guards. A staircase from inside of the chamber leads to the first floor.
The 50 feet wide façade is subdivided into slightly sunk panels presents one of the finest examples of Kashi Kari (tile mosaic). The panels defined by brick borders which are treated with Taza Kari (stucco work). Profusely embellished with multi-coloured tile mosaic, based largely on floral themes including floral arabesque. These renderings are completed in finely cut tile mosaic, using blue, green yellow and maroon colour tiles.