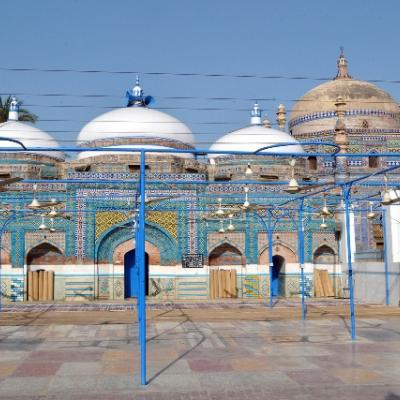 Tahir Khan Nahar entitled ‘Sakhi’ or the liberal, built the present tomb and mosque at sitpur in his life time, at the close of fifteenth century A.D. he was the famous chief of a vast territory around Sitpur at that time.

In 1455 A.D. Bahlol Khan Lodhi granted the country lying between the Indus, which then joined the Chehab at Uchh, and the north of Shikarpur in Sind, to his relative Islam Khan Lodhi. This tract comprised what is now the southern part of the Alipur Tehsil, the southern part of Dere Ghazi Khan, District and the northern part of Sind. Islam Khan took the title of Nahar and established an independent kingdom. Tahir Khan Nahar was grandson of Islam Khan, who extended the boundaries of his territory considerably.

Tomb Architecture.
The mausoleum of Tahir Khan Nahar is octagonal in plan with sloping sides each measuring 13 feet 3 inches and it is in three tiers following the plan and close resemblance of the tomb of Shah Rukn-e-Alam at Multan (1320 A.D). the slope in the structure is emphasized by the addition of round tapering turrets at the angles. The tomb is built on a raised octagonal platform 8 feet high from the adjacent lane on the south, with each side measuring 26 feet 3 inches. It has got seven flight of steps to climb up the podium. The tomb is about 45 feet high from the surrounding ground levels. Thickness of the massive wall of the tomb is 9 ½ feet. The tomb is approached by an arched entrance on the eastern side, which has got two wooden leaves.

The interior of the tomb is decorated with glazed tiles in green, thick blue and white colours which are laid in geometrical and floral patterns.

There are total cenotaphs of 15 graves inside the tomb, two laid on a platform square in plan, its each side being 10 feet long and total height of the platform being one foot. The two graves on the platform are of Tahir Khan Nahar and his brother Mahmood Khan.

There is a miniature arch in the western wall of the tomb just like a mehrab, in the northern and southern wall of the tomb two small openings for light and air circulation at a height of about 4 feet from ground level, each being about 5 feet high and four feet wide were provided.

There are eight arches inside the tomb starting from floor level and height of each of them is about 10 feet. In one situated exactly in the eastern direction the entrance of the tomb exists. And in another, which is situated exactly in the west is another miniature arch inside the bigger arch. Wide and ‘holy Kalimah’ is written in Nastaliq on the upper portion of this arch.

In the interior at south eastern octagon a staircase of 28 stairs leads up to the roof of the tomb and the base of dome.