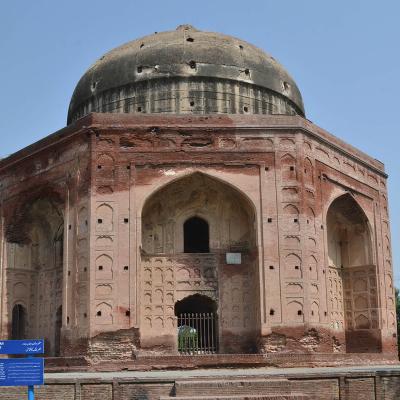 Nawab Bahadur Khan or Khan Bahadur Zafar Jang Kokaltash was one of the important nobles of Mughal Emperor Aurangzeb, died in 1678 A.D and the tomb was built about the same time. During the British period the tomb was considered eminently suitable for entertainment activities and utilized as a theatre, popularly known as Naach Ghar (dancing hall).

This is a magnificent cut brick tomb, on a raised platform following the octagonal plan. Although bereft of its facing, it’s beautiful, well detailed brick masonry lends it a character entirely of its own. The division of wall surface in a pattern of sunken panels defined in Zanjira form and niches.

The tomb eight sides are pierced with alcoves consisting lofty openings, roofed with qalib/ghalib kari squinches. A 5 feet high and 32 feet podium encircles the tomb. In view of the popularity of funerary gardens among the Mughals, no doubt that this tomb once stood in a large garden, the limits of which are no longer possible to trace.