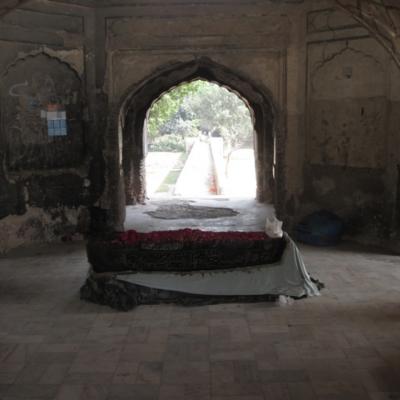 History of Site/ Monument: - The 17th century A.D. tomb is associated with Nadira Begum who was wife of Prince Dara Shikoh, the eldest son of 5th Mughal Emperor Shahjahan. Dara Shikoh also remained governor of Lahore during 1640s. At the time of his wife Nadira Begum’s death, Dara Shikoh was on run after losing battle for kingship against his younger brother Aurangzeb. It was during that hard journey the Nadira Begum died of exhaustion and dysentery in 1659 A.D. Her body was sent to Lahore and buried in the close proximity of Dara Shikoh’s spiritual guide, the saint Mian Mir.

Present Condition (Exterior & Interior): - The façade of the square tomb is simple and blank, devoid of all ornamentation, is a result of Sikh rule, when the tomb is said to be robbed of its costly marble and semi-precious stones. At present the tomb building is in a good physical and structural condition.

Decorative motives/ important features: - The tomb is square and lies in the center of a big tank approached by a cause way on south. According to British period historians the tank was marked with pavilions, while lofty gateways provided access from the north and south through causeway. The gateways are no longer extant but most of the causeway can still be seen. Constructed with massive masonry, the two storey structure with its 44 feet wide square plan form, presents a rather solid appearance. Its four sides are punctured by central, deep cusped arch openings flanked by square headed apertures. The top of the building is encircled with a deep Chajja, 14 feet wide central chamber, an irregular octagon is surrounded by an ambulatory in the form of vestibules. Although no - is surviving of the external façade but traces of glazed tiles are evident in the first floor interior. The use of Qalib Kari/Ghalib Kari for roofs and vaults, a popular way for spanning the transitional spaces, is also employed internally, with good effect.