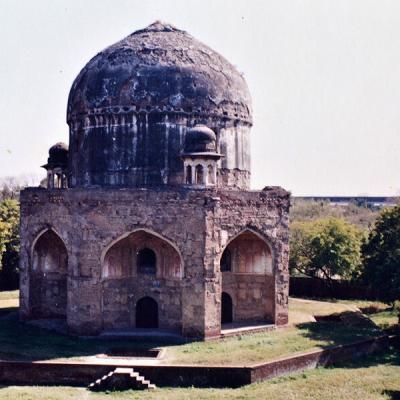 This monument was built by Ali Mardan Khan, a noble at the court of Shahjahan in 1638. He became an indispensable member and most trustworthy colleague of the Emperor and was appointed Governor of Kashmir, Lahore and Kabul. He died in 1656-57 while on his way to Kashmir and his body taken back and buried in this magnificent tomb that he had built for his mother.

Since the monument is well protected because of being in the center of Railway workshop and stores areas. Present condition of the monument is good and well maintained. The sings of ravages can be attributed to the Sikh rule, during which this building of the tomb and its gateway on north, was used for military purposes.

The tomb is octagonal in shape and all sides have lofty Timurid entrances. Structure is superimposed by a massive double dome raised on a drum. Although most of the small domed kiosks (chattries) at the each corner of the roof are lost, these small kiosks were popular decorative feature during 16th and 17th century Mughal tombs. There are enough strong structural evidences those suggest that the tomb was constructed in the middle of a paradisiacal (Chahar-Bagh) garden. The extents of that garden can be gauged by the double-storey gateway in the north. Similar type of gateway would have marked the centers of the south, west and east edges of the square garden. At present entire surface decorations in the interior and exterior of the tomb are obliterated except some remains of frescoes in some alcoves. The exterior walls of the tomb must once have the tile mosaic decorations which now are totally absent. The gateway on the north of the tomb still has the enameled tile mosaic embellishment to advocate the brilliance of its workmanship.