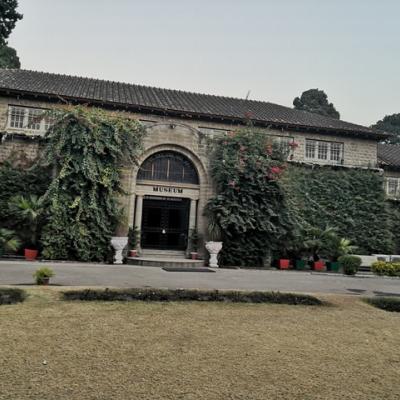 Archaeological Museum, Taxila is situated 0.5 Kilometer northeast of Taxila Railway Station and 35 Kilometer North West of Islamabad. Its foundation stone was laid in 1918 by Lord Chelmsford, the then Viceroy and Governor-General of British India, while the opening ceremony was performed by Sir Muhammad Habibullah, Member for Education on 5th April, 1928. The building consists of central hall flanked by two Galleries. The Museum reflects the cultural history and varied achievements of the people of Taxila during the last four thousand years. From the vast collection of antiquities recovered from the excavations at Taxila, over seven thousand rare and preserved objects have been displayed in the Museum. Archaeological excavation at Taxila or Takshasila as it was known in ancient history were carried out between the years 1913 and 1934 by Sir John Marshall, then the Director General of Archaeological Survey of British India. After Independence, it was left to Pakistani Archaeologists to take up further investigation of the Taxila Valley who unearthed hitherto unknown antiquity of this city. These excavations at Serai Khola, Hithal have helped to reveal the remain of early settlement sites belonging to Neolithic, Early Indus Valley Civilization and Gandharan Grave Culture periods, recently the Department of Archaeology has conducted excavations at the Buddhist stupa sites of Jinnah Wali Dheri and Badalpur, at Jinnah Wali Dheri mural paintings of Buddha were recovered which is unique phenomenon in the history of Gandhara art. The early excavations done in pre-Independence days had revealed the remains of three ancient cities of Taxila locally known as Bhir Mound, Sirkap and Sirsukh and over two dozens of Buddhist stupas and Monasteries of early historic period. Dharmarajika, Kalawan, Giri, Kunala, Mohra Moradu, Pipplan Jaulian, Bhallar, Lal Chak and Bhamala are better known for their stupas and Monasteries. Highlight of the permanent Exhibit This Museum is an Archaeological museum dedicated to exhibiting artifacts unearthed from site in and around Taxila Valley. It’s Mission to be educate the general public about the ancient culture and history of the region.

1. Stone Sculpture (1st to 3rd century A.D.)
The stone sculptures are mainly displayed in the main central Hall. Main Collection of the stone sculptures based on the relief panels representing previous birth storey (Jatakas) and life story of the Lord Buddah (The founder of Buddhism) and individual sculptures of the Buddah, Bodhisattvas like Siddhartha, Matriya and Padmapani, worshipper and non-Buddhist deities relating to the Greeks Hindu religious, architectural elements and relic caskets.

2. Stucco and terracotta sculptures (1st to 5th century A.D.)
Stucco is a fine past made of lime and sand or some time gypsum and sand. The art of modeling sculptures in this material appear to have been introduce in to sub-continent from the west by the Sakas of Persians. The earliest example it may be the acanthus-leaf decoration on the small stupa or the turbaned heads of Bodhisattva from apsidal temple at Sirkap. The finest pieces of the stucco and terracotta sculptures of Buddha Bodhisattvas devas(angles) monks, Hindu ascetics, lay worshippers, architectural elements and a unique scene of the death of Buddha (Mahaparinivana) are displayed in the northern gallery of the museum.

3. Gold and silver Jewellery (3rd century to B.C. to 1st century A.D.)
An exquisite and wonderful collection of gold and silver jewellery with indigenes and Greco-Roman influence was discovered at Taxila and is preserved in the Museum jewellery room. Among the types of jewellery are the ear pendants of various shapes, necklaces, girdles, breast chains, belts; amulets, pendants, bangles, bracelets, torques, anklets and finger rings.

5. Inscription and Writing Material (3rd century B.C. to 5th century A.D.)
A number of inscriptions found during excavations are preserved in this museum. These are in Aramaic, Kharoshthi and Brahmi scripts. A unique inscription in Aramaic was built in a wall of Sirkap. It is mention King Priya Darsi (Ashoka), his queen and sons and is datable to 3rd century B.C. Kharoshthi was the official script of Gandhara from n3rd century B.C. to 5th Century A.D. and the inscriptions in it are found on cornicepeice, bracket figures or pedestals of the statues. Brahmi script was also used at Taxila of the birchbark pieces with writings in it recovered from Jaulian Monastery are preserved in the Museum. As regards the writing material, a number of copper, stone and pottery inkpots and writing tablets found from the excavations are the proud collection of this museum.

6. Metal Ware (1st to 5th century A.D.)
The house hold objects fall into three distinct categories silver, copper and bronze. It is through them that the Museum endeavors to project an image of the everyday life of that period. Cooking pots, jugs, ewers, goblets, bowels, cups, dishes and saucers, frying pans, mixing pans, ladles and spoon and incense burners, all are represented with developed shapes and fine workmanship.

9. Tools and Implements (6th century B.C. to 5th century A.D.)
A large number of tools and implements are displayed in the museum, which were recovered during excavation of the archaeological sites of Taxila valley. The most interesting among them are the tools of goldsmith, farmer tools, potter implements and surgical instruments.

10. War Weapons (1st to 5th century A.D.)
Being a transitional area between the highlands of central Asia and alluvial plains of the Indus and Gangarivers, it remained subject to the continuous invasions, because all invaders who came from north or North West crossed this land. Many weapons were recovered during excavations of the sites; they consist of swords, spear heads, arrow heads, javelins, daggers and amours, which are displayed in the museum.

11. Miscellaneous Objects
There are a number of objects which do not fall, strictly speaking, into above categories but do deserve a mention. A lovely small lion carved out of rock crystal and found along with relics from stupa at Dharmrajika, incense burner with a rampant lion handles: glass tiles and bottles, children toys, ivory, bone and shell objects and are a few examples out of an array of such pieces.