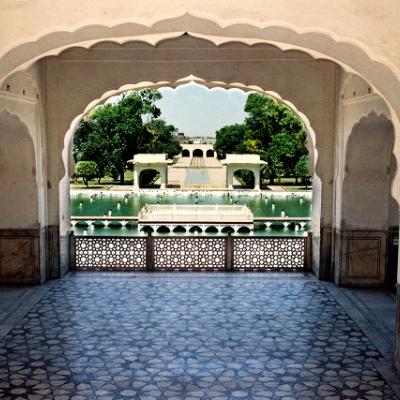 Terraced and walled gardens with pavilions and canals running through the centre were another innovation introduced for the very first time in the architectural history of the sub-continent, by Mughal Emperor Shahjahan. These garden are well known to the world by their popular name of “Shalamar”.

Perhaps there is no other garden in the whole of Asia which nature and man have combined to make so lovely, and round which history and legend have woven so much romance.
This garden occupies some 40 acres of land and laid in 1642 A.D., at the command of Emperor Shahjahan completed at a cost of Rs. Six Lakhs under the Superintendent of Khalilullah Khan. Shah Nahar, later known as Hansli canal, was brought to irrigate the garden from Rajpur, present Madhupur, at a distance of more than a hundred miles, costing two lakhs of rupees.

The uppermost terrace of the garden is called ‘Farah Bakhs’ (Pleasure giving), and the middle and lower most terraces combined are named as ‘Faiz Bakhs’ (bountiful).
The garden was laid out as a royal recreation place as well as for providing accommodation whenever the Emperor was on a visit to Lahore. For this purpose a number of pavilions and summer houses were constructed in it.

In the upper most terrace, the present main entrance was originally the aramgah (rest room) of Shahjahan.

The building on the east in the same terrace, now known as Naqqar Khana, was Jharoka-e-Daulat Kjhana-e-Khas-o-Am (the window of the hall of special and common Audience), on the west was the residence of the Empress. There is a hammam on the east of middle terrace which was originally decorated with pietra dura work. There are six corner burjis surmounted by dome and four pavilions in the second and one in the third terrace.

The garden suffered much during troublous times of Ahmed Shah Abdali (1747-1772 A.D.) and the Sikhs who robbed almost all of its decorative works in marble, red sandstone and pietra dura for re-using the same in their own buildings.