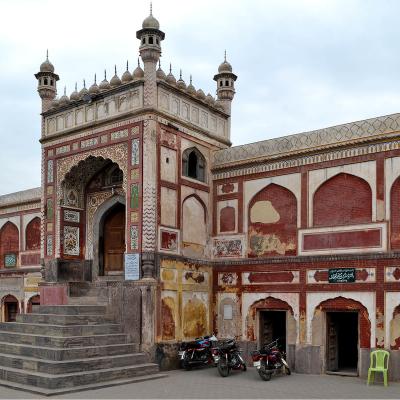 The mosque is situated in the heart of the town with Islamia High School on its south and Shahi Bazar on North.

It is a three domed structure built by Nawab Sa ‘dullah Khan Thahim, Governor of the Province during the reign of Shah Jahan, with an ablution tank in the centre of the courtyard. It is a brick structure with a sprinkling of black streaked stone. The stone is used in the steps of the eastern and northern entrances and for the bases of the pilasters in the outer walls of western side. The size of the brick used is generally 8” x 3 ½ “ x 1”.

From the existing traces of the old colour decoration in the interior of the prayer chamber it appears that the mosque was originally tastefully decorated with coloured decorations in floral and geometrical patterns. But unfortunately this aspect of very interesting decoration is now almost lost with the exception of small patches here and there.