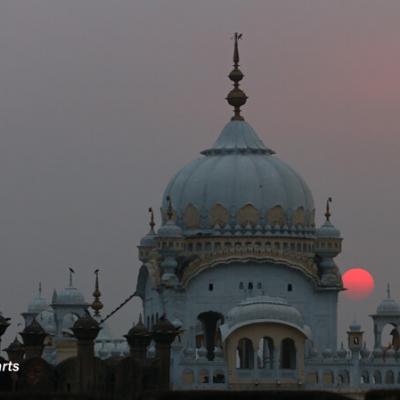 Smahdh refers to the place where the body of Ranjit Singh, his son Kharak Singh, and grandson Nau Nihal Singh were cremated. Smadh of Sikh ruler Ranjit Singh is occupying space in the southwest corner of Sikh Gurudwara Arjun Dev, opposite the Lahore Fort on west. Ranjit Singh was the Sikh ruler of Punjab from 1799 to 1839. Ranjit Singh, the one-eyed Sikh ruler considered himself the heir of Mughal Empire. He not only followed many of the customs of Mughal court, he built buildings utilizing elements pilfered from Mughal monuments. The alliance between British missions and Ranjit Singh provided a lasting stability to the Punjab rulers till the death of Ranjit Singh in July 1839. The death of Ranjit Singh heralded a period of intense warfare among his successors and paved the way for the annexation of Punjab by the British. According to the customs Ranjit Singh’s body was placed on a pyre and along with him were burnt alive his very handsome four wives, the four ranees, seven slave girls, one of them was o beautiful Kashmiri Girl called Kanwal (Lotus). Smadh was begun by Kharak Singh, son of Ranjit Singh, on the location of the funeral pyre and completed in 1848. Later, at the same floor level and spot smadhs of Kharak Singh and Nau Nihal Singh and their wives were prepared on the south of Ranjit Singh’s smadh.

Architecturally a little complex but interior and exterior of the building is well in shape and state of preservation.

The monument is built with bricks and red sandstone and marble. It is an offensive blend of Hindu and Muslim/Mughal architecture intentionally promoting the Hindu taste. The Square roof with a central fluted dome is crowned with small pavilions. The ceilings are decorated with glass mosaic or plain glass work that has been skillfully done. The arches in the interior are of marble. In the center of funeral chamber is a small marble pavilion decorated with Petra Dura work. In this rests a central marble urn in the form of lotus containing the ashes of Maha Raja Ranjit Singh, eleven smaller marble knobs placed all around contain ashes of four queens and seven slave girls. The interior of the smadh is also decorated with frescoes depicting mostly the lif stories of Sikh Gurus. The large marble door-frame of the main entrance of the smadh bears a superb Petra Dura work and about 21 other marble door-frames at differen places in the building bearing the high class Petra Dura work seem to have been pilfered from various Mughal buildings, especially from Lahore Fort.