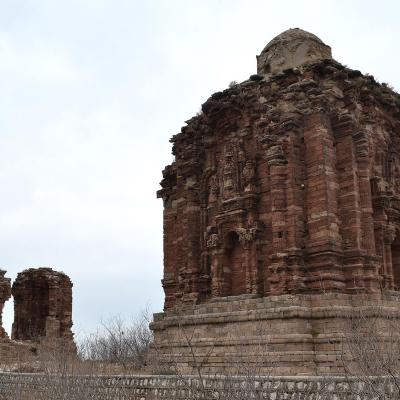 The best known example of the temples in Jhelum district is the temple of Malot, identified with Singhpura of Hiuen Tsang, formerly, the ancient capital of Salt Range. Situated on the highest point in Salt Range it is 16 miles north west of Pind Dadan Khan and about 12 miles due north of river Jehlum. The temple is built in four squares in Kashmir style with a recessed bay in each face and flanked by flouted columns capped by a trefoiled arch. The roof which had fallen long ago, was in all probability, built of stone in pyramidal shape and comprised of two or more stages. It was the product of the period of King Lalita Ditya of Kashmir who ruled over north Punjab including salt range. The temple was built in the 9th century A.D and protected in 1913.