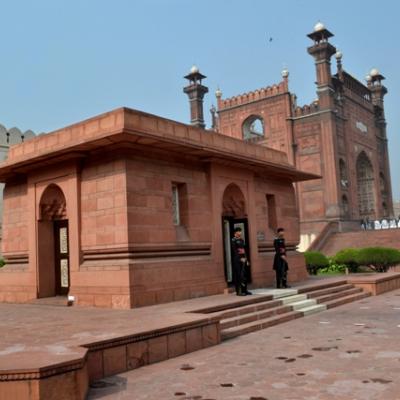 Allama Dr. Muhammad Iqbal, the poet- philosopher of the East, and the visionary of a separate home land for the Muslims of the sub-continent was born at Sialkot on 09 November February 1877 and died on 21st April 1938 at Lahore.  He was buried at this place in the front of Badshahi Mosque forecourt. Building of the present tomb was erected on his grave in 1951. The tomb was designed by Nawab Zain Yarjang Bahadur of Hyderabad, Daccan, an architect of late Nizam Government. The tomb building bears Turkish, Mughal and colonial architectural styles, successfully attempted to be combined in this mausoleum building.

The building has been specially designed of low elevation avoiding any impediment to the view of historical Badshahi Mosque. It is small building as compare to the Badshahi Mosque. Slightly tapering walls, bold molding set in cavetto just above the plinth give this building an eminence among the environs of huge historic buildings. The door frames are in marble and so are the screens with mono- gram of poet’s name carved in their center. The top is finished with an eave and flat roof. The interior of the tomb is embellished with marble slabs bearing floral and geometric designs in relief and also is inscribed with six couplets from Zabur-e-Ajam, one of the well known books by the poet.

The beautiful marble cenotaph with its platform is decorated with aragonite panels of different colors and headstone of translucent marble is a gift from Afghan Government. The headstone on its front is inscribed with two of the poet’s couplets summing up his views against racial and color discrmination.