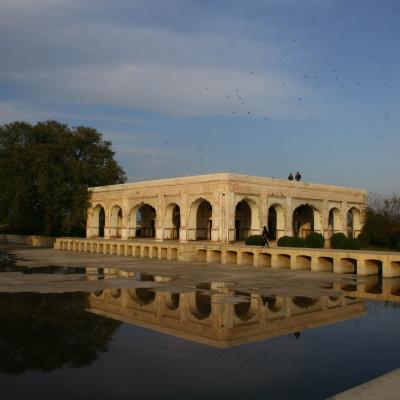 Constructed by Mirza Kamran, the eldest son of Babar round about 1530 A.D. it is the first Mughal structure at Lahore, which was the summer house of the price, who apart from his political follies was the most accomplished man of his age. Thus he was pioneer of Mughal architecture and especially the garden grooves at Lahore. The Baradari was in the centre of a garden about 1600 feet square, which had a number of pavilions and walls. The Baradari was standing in the centre of a high tank approached by cause ways. This valuable and historical structure, where Jahangir in his time sentenced his eldest son Khusro because of his rebellious attitude, has not only been the victim of the ravages of time and the disastrous floods of Ravi, but also of vandalism. Before independence half of it had already been washed by the River Ravi the half was carefully looked after by the Department of Archaeology.