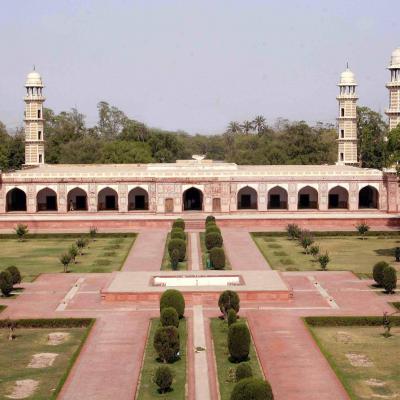 The tomb of 4th Mughal Emperor, Noor-ud-Din Muhammad Jahangir (1569-1627 A.D) built in the middle of an enormous garden on the right bank of River Ravi at Shahdara  town on the north- western outskirts of Lahore. Jahangir died at Rajauri on his way to Kashmir and according to his will; his dead body was brought to Lahore and buried in a beautiful garden called, Dilkusha, owned by his favorite and celebrated queen Noor Jahan. The monument took ten years for complition and cost Rs.10 lakhs. The contemporary court accounts credit Shahjahan, son of Jahangir, with the construction of his father’s tomb; it is more likely to have been the result of Noor Jahan’s vision.

The tomb and its garden are enclosed by a high brick wall with an imposing gateway on the western side linking the Akbari Sarai. The tomb garden is divided into four main parterres and further sub divided into sixteen equal squares by brick paved walkways with water channels. Each intersection is marked by an alternate octagonal and square cistern.  The division of garden is an attempt to follow the setting of a Chahar Bagh Rauza (paradisal garden mausoleum). The tomb is a single-storey square building, measuring 267 feet on each side and constructed on a high platform. The most striking feature of the building is its arcaded verandah of the inner sanctuary, which runs in front of the series of rooms and four vaulted bays lead to the central burial chamber. The burial chamber contains the marble tomb stone of the Emperor marking the grave underneath. The sarcophagus and the platform are convolutedly inlaid with semi- precious and precious stones depicting floral pattern and ninety- nine attributes of Allah. The bay leading to the grave is profusely ornamented with fresco paintings on the ceiling and side walls at dado level, are bedecked with tile mosaic work. Designs finished with cut pieces of various stones such as Snag-e- Badal, Sang-e Abri and black and white marble on the floor making the overall aesthetic impact more enchanting. Hardly any part is left unembellished. The inner sanctuary is screened by a panel of fine marble beehive fretwork. Four octagonal minarets on each corner of the square structure are built. Each minaret is raised in four stages and crowned with cupola. The three stages in the middle are decorated with horizontally laid zigzag design by inlaying white, yellow, and black marble. Each stage is defined by railing supported with marble bracket. The entrance gate from Akbari Serai is double storey building, the exterior of which is decorated with inlaid geometric and floral designs registered in red sandstone panels. The half of the dome of the arched entrance bears honeycombed pendentives flanked by panels representing summit and bouquet of flowers.

Mirza Abdul Hassan, Itiqab  Khan or Asif Khan (III) himself was the stuff of legend, brother of Empress Noor Jahan and father of Mumtaz Mahal ( the title given to Arjumand Bano) the lady of Taj and favorite wife of Shahjahan. Asif Khan ascended to an unprecedented rank of 9000 personnel and 9000 horses, a rank once reserved only for princes. Emperor Shahjahan appointed him Sippah-Salar, (commander-in-chief) and also granted him the title of Yameen-ud Daula. Asif Khan was not even instrumental in struggle of Shahjahan for securing Mughal throne but also became famous for his taste for art and architecture. He died in November, 1641 A.D and buried in this mausoleum which was built by Emperor Shahjahan in four years at cost of three lakhs rupees. Asif Khan was reputed to have left a colossal fortune, his house in Lahore (Choona Mandi Women College) alone having cost of 20 lakh rupees at the time of its construction. The entire compound, garden and tomb, is enclosed by a brick wall finished with lime plaster and approached through an imposing gate on south.The tomb is not a part of the Jahangir’s tomb complex but at present its entrance is from Akbari-Serai. The all original entrances of Chahar-Bagh Rauza compound were blocked in recent times. As soon as one enters in the compound, he gets struck by the high bulbous dome of the octagonal monument, raised on a large octagonal podium with its recessed adcoves, the very character of Ali Mardan’s tomb. This is one of the much ravaged monuments during the Sikh period but still impressive because of the expansiveness of the garden around it. The spacious garden once set with reservoirs, fountains and beautiful walkways (khayabans).

A cluster of monuments situated in what was once the Mughal Dilkusha Bagh (heart expanding garden) on the bank of River Ravi in Shahdara town. The group includes an array of interlinked monuments like Jahangir’s tomb, Akbari Serai and Asif Khan’s tomb. Akbari Serai serves as a forecourt of these monuments and gardens. The lofty double-storey imposing Mughal gateway leads into the quadrangle known, the Akbari Seri. The structural evidences like size of bricks and general plan of gardens and buildings, as a whole, suggest that Serai and the entrance gateway of the tomb of Jahangir were built during the same time that was Shahjahan period. The Serai was meant for the wayfarers and also to accommodate the establishment looking after the tomb. During the British period towards the end of 19th century A.D it was used as the manufacturing depot of the North Western Railway.

In the middle of western row of the chambers/ cells of the Serai, stands a grand mosque with impressive lofty arches and inlay work typical of Shahjahan period, composed of similar elements as the gateways of Serai contain.  This mosque during the 19th century A.D. was forced to serve as a private European residence.