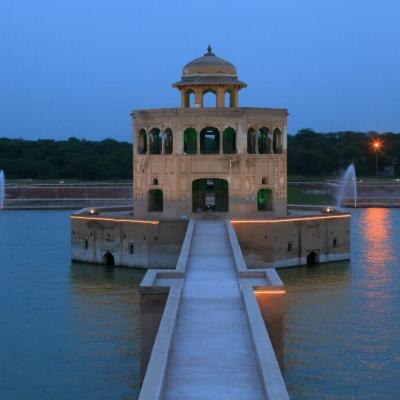 The Minar Built in country bricks was constructed under orders of Emperor Jahangir in about 1606 A.D. it was built in the loving memory of his pet antilope named Mansraj, which was captured somewhere in this area originally a royal hunting reserve. Jahangir has mentioned in his Tuzk  that near Jahangir pur (Present Sheikhupura) a minaret was raised by his orders, in 1051 A.H. 1606 at the grave of an antelope called Mansraj.

It is a massive, tampering and high brick built tower of four storeys excluding the top one which is missing. The existing height is 95’-4”. The lowest storey or basement is octagonal in plan with each side measuring 13’-3” and is richly paneled. The rest three storeys are circular. There are small openings for light in each storey and in the third storey there is a small octagonal room where the visitors can take respite.

The staircase is entered through a small door provided, at regular interval in the three upper storeys of the minar. The exterior of the tower was once lime plastered sufficient patches of which still remain. The ruined platform on the north is apparently a latter addition. The main object of the builder appears to have been to gain height besides a memorial, it may also serve as excellent watch tower to locate the wild antelope and other game.

About 275 feet east of the Hiran Minar is a suitable double storey gateway of the usual Mughal style leading to the Daulat Khana or baradari situated in the centre of a big thank and is approached by a long cause-way built on 21 pointed arches erected from the middle of the west side of the tank right upto the Baradari. This island summer house in the midst of a spacious area is a unique monument in Pakistan

The tank is enclosed by a terraced wall 8 ½ feet high and 7 ½ feet thick surrounded by a dwarf wall 2’ thick and 2 ½’ high thus the whole thickness of the terraced wall is 9’-9”. In the centre of each side of the tank there is a spacious paved ramp for the entry of animals and boats. Besides on every side the terraced wall is pierced at regular intervals with four stair cases 7’-7” wide and of 7 steps each allowing entry to the tank.

Occupying the centre of the tank, the Daulat Khanah is a precious octagonal summer house in three storeys, the top one being only a domed open pavilion. The entire structure rests on a high octagonal plinth emerging out of water sheet of the tank.