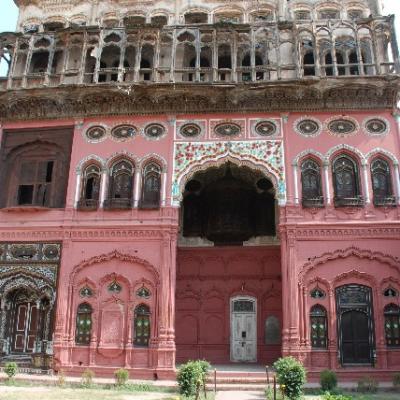 Sheikh Omar, a wealthy business man migrated from Chiniot to Calcutta in the late 19th century after marrying against his family's will. Sheikh Omar's only son Gulzar was born in 1920.  Later Sheikh Omar decided to return to his hometown and to construct and a magnificent Palace that would feature the best of Chiniot's craftsmanship.

Syed Hassan Shah was assigned the task of palace's construction. He gathered Chiniot's best artisans along with artisan from different locations. Rahim Bakhsh and Elahi Bakhsh, masters in the manabat kari style of wood carving carried out much of the mansion's woodworking. Ahmad Din completed the brickwork, while the celebrated artist Niaz Ahmad Jalandari did the stucco-work. Another celebrated artist, Jan Muhammad, painted the mansion's frescoes. It took ten years to complete the Palace in 1935 at a cost of Rs. 400,000. Sheikh Omar died shortly after the completion of the Palace. He was buried in the courtyard of the Palace.

Gulzar Muhammad son of Sheikh Omar then also shifted from Calcutta to Chiniot. His marriage took place in this beautiful building but was found dead mysteriously on the very next day. The death of Gulzar Muhammad led the rest of his family members to abandon the building believing it to be a cursed one. Such an exquisite building was left at the mercy of the time and tide. Resultantly, decay and dilapidation of the structure started rapidly and two levels of the mansion had to be removed in 1970s, while another level had to be abandoned following severe rains in 1993. Mr. Muhammad Athar Tahir the then Deputy Commissioner Jhang in 1990 took it in government’s custody and the task of implementation of the conservation and restoration of the Gulzar Palace was entrusted to the then AC Chiniot Dr. Muhammad Amjad Saqib. The building was converted in to research centre cum library which was completed on 14th August 1990.
Today Gulzar Mahal stands as a symbol of exemplary craftsmanship and splendid interior stucco design. It is a marvel of architecture with carved ceiling and opulent woodwork.