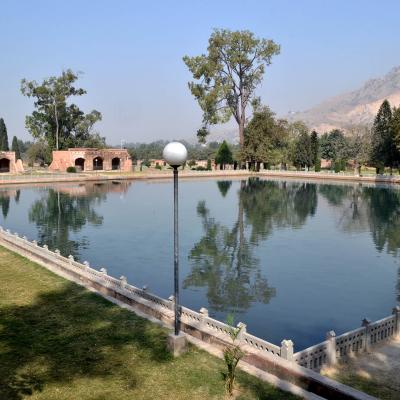 About 9 miles from Taxila on the main G.T. Road at Wah, amidst the rivulets and springs, is situated the complex of Garden, Pavilion and Tanks popularly called Farudgah-i-Shahan-i-Mughlia. According to the account of Mughal Emperor Jahangir, recorded by him in his autobiography, the Farudgah was constructed during the days of Emperor Akbar by Man Singh. It was also visited by Emperor Jahangir. Later on, it appears that the elaborate garden with pavilions, water-tanks, channels and walk-ways was erected during the days of Shah Jahan on the pattern of the famous and traditional Shalamar Gardens. Like the other pleasures of the Mughal period, the Garden was divided into three stages through screen walis having main entrance on the west. In between the first and the middle stage was an imposing pavilion having a cascade, a cisteran and water channels. The middle stage had the main water-tank (200’x200’) and a pavilion at its end. Beyond that was an oblong shaped Baradari which was used as the halting lace of the Emperor (the Fardgah). Outside the perimeter wall on the north western side were some other structures now indicated with traces of foundations. The plan show’s their resemblance to the Naqqar Khana of the Shalamar Garden at Lahore.