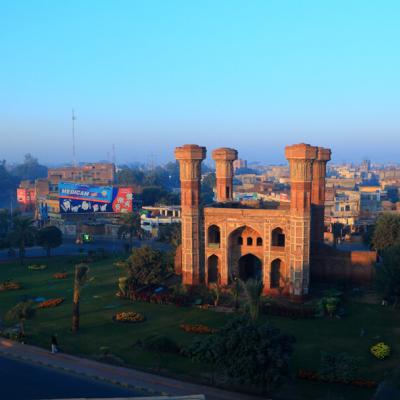 Situated on the Multan Road, the monument was actually a gateway to a garden that has now disappeared. It is called Chauburji (the four minarets) because of its four corner minarets, out of which one on the north west corner was actually lost. The fragmentary inscription on its eastern archway records that the garden was founded in 1646 A.D. by a lady, mentioned meataphorically as “Shahib-e-Zebinda, Begum-e-Dauran” (one endowed wit elegance, the lady of the age) and was bestowed upon one Mian Bai.

The reference is most probably to Jahan Ara Begum, the eldest daughter of Emperor Shahjahan, who was entitled as ‘Begum Sahib’ and for all official purposes was the ‘lady of the age’ after the death of her mother in 1631. That there was a garden of Jahan Ara Begum at Lahore is confirmed by two letters of Emperor Aurangzeb addressed to her.

The local tradition connects Zebinda with Zebun Nisa Begum, the accomplished daughter of Aurangzeb and Mian Bai as her maid-servant. This tradition however is incorrect, since Zebun Nisa, born in 1639, was still a child of eight when the garden was founded.

Mian Bai is not Known to history, but that she was a maid servant is not supported by the fragmentary inscription on the south-west corner of the gateway, which records that the garden was constructed by Mian Bai, the pride of women (Fakhrun Nisa). From the word “Fakhrun Nisa” it seems that she was a lady of status.

The main architectural merit of the building is its rich mosaic decoration with which its entire façade including the octagonal corner minarets are brilliantly embellished. The minarets are slender for their height and end at the top in coved platforms which once carried arched pavilions.

The panel over main vault is inscribed with Ayat-al-Kursi, a verse of Holy Quran, in blue enameled letters. At the end of this inscription the year A.H. 1056 (1646 A.D) is also given.