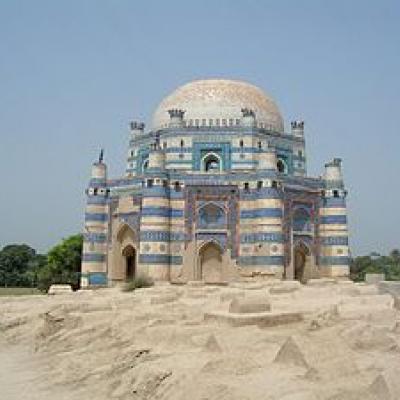 Octagonal in plan, the tomb is built on some 50 feet high mound in with glazed tiles. The sides have round tapering turrets surmounted with round pillars of the same style. The facing of the turrets is of glazed tiles.

Each octagon has an oblong framing with a border of glazed tiles and within this frame is an arched opening, recessed in three stages and faced with glazed brick tiles. The floral design is composed of brick tiles of triangular shape. The south-west octagon had a flight of steps leading to the second storey. Similarly, the interior of the tomb had arched recess in three stages the soffits of which are covered with glazed tiles.

Above the arched recesses is a row yet another arched recesses arranged in similar fashion. The upper arched recesses are placed on a wooden framing-imbeded in the core. Their top has yet another wooden framing and the bases of the smaller squinches where the zone of transition takes the shape of sixteen bell-shaped wooden brackets placed obliquely. The base of the huge hemispherical dome is placed on a wood frieze composed of two wooden bands in between of which are restrained brackets of bell-shaped pendants at regular interval. The personage lying buried here was the pious lady popularly known as bibi Jiwindi, the great grand daughter of Jahaniyan Jahangasht. The tomb is said to have been constructed by ruler of Khurasan, named Muhammad Dishad in 900/1494. In 1233/1817.