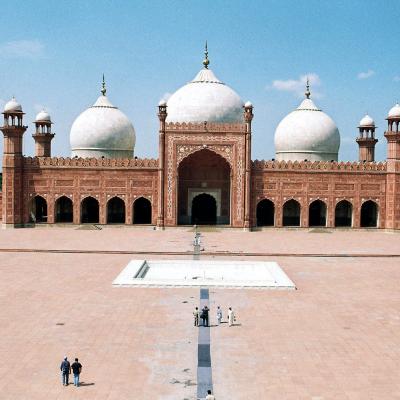 Badshahi Masjid (Royal Mosque), built (1673-74) during the period of 6th Mughal Emperor, Alamgir, who entrusted the construction of mosque to Fidai Khan Koka, his half brother. An inscription on the entrance of the mosques reads as – the mosque of Abu Zafar Mohiu-ud-Din Muhammad Alamgir Padshah was finished in 1084 AH under the supervision of the humblest of his stars, Fidai Khan Koka.

During the inter-Sikh wars, in1841 Sher Singh used minarets for Zamburahs or Jamburahs (light guns) to bombard the supporters of Maha Rani Chand Kaur in besieged fort.  The present structural and physical condition of the historic mosque, unquestionably, is in good state of preservation.

Badshahi Masjid because of its immense size and majestic look conveys a grandeur and dignity of the Mughal Emperor. The square courtyard, each of its sides measuring 530 feet, once lined with cooling bricks or according to some references provided with a network of covered channel with running waters replaced with red sandstone during the recent times. The combination of red sandstone and marble, utilized in façade decoration, seems unusual in Mughal buildings. The extensive use of red sandstone background or base all over the façade with arched front, along with its four corner towers, make the whole ensemble capped by entirely  huge white domes and cupolas, gives a certain purity and nobility to the entire composition. The well proportioned bulbous domes, rising above the prayer chamber with their finials glinting in the sunlight enhance the radiance of the monument. The courtyard of 530 x530 feet overwhelms with its vastness.  The whole structure is built on a raised platform with entrance on east approached by a flight of 22 stairs, rising from three sides, ending on an open red sandstone stay.  The stone facing of the mosque is richly decorated with white marble inlay, fresco foliages and elegant plaster relief work. In the center of vast courtyard there is a tank 50 feet square in plan and 3 feet deep, for the ambulation. The courtyard flanked all around by 80 Hujjras(cells) which served as a Madrasa (college) during the Mughal reign. Hujjras on the east were pulled down by the British in 1856, later that have been reconstructed and converted into long arcaded ablution halls. The interior consists of two long halls with remarkable height. The front is divided into two big halls by the intercepting central vault. The rear portion is divided into seven interconnected bays by means of eight massively build arches. The dado running through the entire interior is set out with well-polished sang-e-abri. The rest of the interior have marble veneering finished with lime plaster bearing an excellent network of floral pattern in relief. The four corner minars with circumference of 67 feet rising to a height of 176 feet can be seen from miles. The top of each of the minar is crowned with a pavilion on octagonal shafts, and 204 steps are provided to ascend to the top.