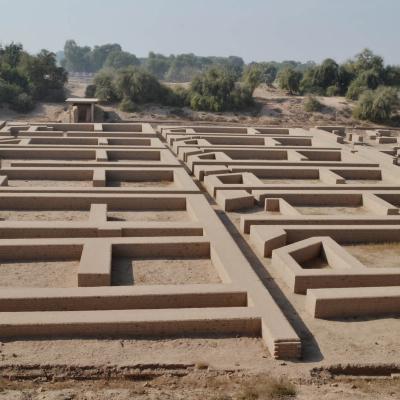 Harappa has the honour of being the first site where the remains of one of the most celebrated civilization of the ancient world were first discovered. The ruins of this celebrated city lie at a distance about 17 miles south-west of Sahiwal. It is connected with the Karachi-Lahore Highway by a metalled link-road of some four miles from Harappa Railway Station. More than a century ago in 1856 a British road-engineer named William Bounton ruthlessly dug down these precious remains in search of brick ballast for a railway line which he was laying from Multan to Lahore. During the process of that spoilation several antiquities were found which were either destroyed or taken away by the labourers. Among these a steatite seal and a few chert blades were examined by Sir Alexander Cunningham. The site remained un-attended for the next seventy years when again in January 1921, regular excavations were started by the Archaeological Survey of India and the true significance of the ruins was recognized. It was established that the city existed some five thousand years ago as a twin capital of the Indus valley civilization. Between the years 1923 and 1925 and again from 1926 to 1934, major excavations were carried out at various parts of the site. Further investigation to determine the true chronological sequence were undertaken by Sir Mortimer Wheeler in 1946 who uncovered, among other things the portions of a massive mud brick fortification having rectangular bastions at frequent intervals. Besides the fortification wall which surrounded the citadel, there was a lower city having important public and private buildings and two cemeteries on the south.

Among the most important building remains in the tower city were the workmen quarters, circular platforms and the great Granary. This complex of regularly and systematically laid out buildings show a coordinated planning which must have been made and executed by a competent authority responsible for the town planning of Harappa. In addition to these Public and Private building, the two cemeteries located on the south of citadel at a comparatively higher ground revealed interesting information about the burial system of the Harappan people.

The remains for these buildings yeilded millions of objects used by the pre-historic people of Harappa. Object recovered range from the tiny and ordinary household to the delicate specimens of Jewellery and statuary. Some of these specimens are now on display in the small museum located near the site.