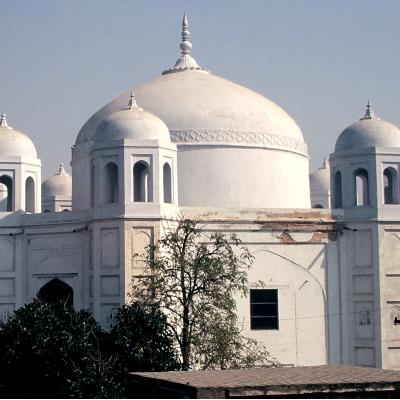 Anarkali tomb is one of the earliest surviving and most significant buildings of the Mughal period. Not only a brilliantly structured octagonal building also it is a remarkable memorial of the love-legend about the Shahzadah Salim (later famous Mughal Emperor, Jahangir) and girl Anarkali (pomegranate kernel). The legendary story is variously told, but the pith of the legend is that the poor girl Anarkali was executed for her amorous folly in 1599. Mughal sources are silent about Anarkali.  European travelers of the time mentioned the popular gossip rife at the time, referred Anarkali as Akbar’s (Jahangir, s father) most beloved wife of the harem.  Anarkali whose name was Sharf-un- Nisa or Nadira Begaum found giving a return smile to the prince by the emperor in the mirrors of his palace. Suspecting an intrigue or worse, Akbar ordered Anarkali to be interred alive. Accordingly, she was placed in an upright position and buried alive in a masonry wall, brick by brick. The prince Salim (Jahangir) after becoming the Emperor in 1615 raised a beautiful structure over her grave after 16 years of her death. Over the last couple of hundred years, the tomb has been put to several uses. In the first half of 19th century it served as the residence of Ranjit Singh’s French general Jean Baptiste Ventura’s Armenian wife. From 1847 it was used as offices for clerical staff of the first British Resident, Henry Lawrence. From 1851 it was the venue for divine service; while in early 1857 it was consecrated as St. James Church, later being declared a Pro-Cathedral. However it is this tomb gifted the name Anarkali to the whole area when the British first set up cantonment here

Today the monument seems like a simple, whitewashed massive brick structure, without any prominent decorative features. The tomb once set off as the centerpiece of a beautifully laid out garden setting, is at present hemmed in by structures surrounding it.  The building of the tomb is in a good state of conservation and maintenance.

With a big and bold overall look the tomb stands within the enclosure of Punjab Civil Secretariat. The tomb is laid on popular Mughal architectural format using an octagonal plan with alternate sides measuring 44 feet and 30 feet respectively. It is unique in its utilization of semi-octagonal towers dominating each corner, rising well above the walls and terminated with cupolas over pavilion- like kiosks. A low pitched double dome spans the central chamber and is carried on a drum or neck. The marble cenotaph, dislocated from its proper place, is elaborately carved with delicate floral and tendril designs. The calligraphy is in Nastaliq, boldly carved, but lacks the uniformity of pen. On the top and three sides are inscribed 99 attributes of Allah. Besides, the other two inscriptions give the date of death of Anarkali both in figures and words as 1008 A.H/ 1599 A.D and the date of the construction of the tomb as 1024 A.H/1615 A.D. There is no mention of the person buried in this mausoleum.