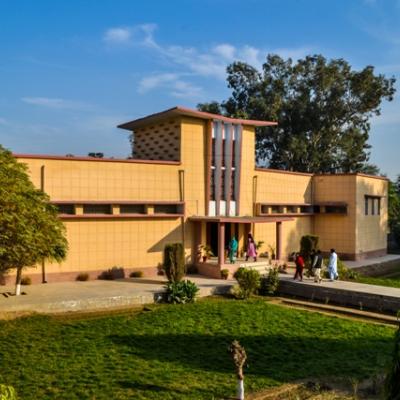 Harappa museum and site are prominently visible in the countryside and lie on the left bank of the old course of River Ravi .These are about 7 Kms. away from Harappa Road Railway Station the nearest station on the Karachi –Peshawar line of Pakistan Railways. There is a metalled road on which vehicles are conveniently available for journey from Harappa Road station to the Harappa museum and sites. Direct wagon and bus transport facilities can also be had from Sahiwal and chichawatni, the district town situated at the distance of 24 Kms. from Harappa museum.

Harappa museum was established in 1926. It is a site museum known as Harappa museum and presents the Harappa culture or Indus valley civilization. The Indus valley is one of the
world oldest civilizations which flourished about 3500 B.C. to 1500 BC in areas, which are presently, watered by the river Indus and its tributary rivers such as Ravi, Bias, Satlug, Chanab and Jhelum. So for more than four hundreds sites of the Indus valley civilization have been discovered in which Harappa and Mohenjodaro are identified as its two major urban centers. Harappa is a type site of Indus valley civilization. The first visit of ancient mounds at Harappa was reported by Mr. Masson in 1826 Mr. Burns visited the mounds in 1831 and followed by Cunningham twice in 1853 and 1856. Cunningham estimated the extent of the ruined city about 3 Kms in circuit which includes only the limit of structural remains if the fields now covered with the broken bricks or other scattered remains are added to this calculation, the expansions if the old city becomes nearly 5 kms. in circuits. Unfortunately, before the area was declared protected in 1920 the mounds at Harappa had long been the source of brick ballasts for about 160 kms. of the Lahore –Multan Railway line as well as a ready means of bricks for the people of modern towns of Harappa. The first excavation was conducted by Daya Ram Sahni in 1921 and continued up to 1925. The Mr. Madho Sarup Vats excavated the site from 1926 to 1934. Thereafter, Mr. k.N Shastri excavated the site in 1937. Sir, R.E.M. Wheeler laid the trenches on the site from 1944 to 1946. After the emergence of Pakistan on 14 August 1947, Dr. Muhammad Rafique Mughal carried out excavations at Harappa in 1966 and added useful information already known from the site. The American archaeological Mission in coordination with the Department of Archaeology and Museums, Government of Pakistan, under the guidance of Dr. George F. Dales stated archaeological research a Harappa in 1986 to 2001. Presently Harappa is the only site of the Indus valley civilization that provides complete chronology from 3500 to 1500 B.C. here at Harappa one can study the evolution and development in different Art craft and technologies of the Indus valley civilization. Although excavations at Harappa did not show the complete town planning of the city but many valuable objects have been recorded from the site. Objects discovered from Harappa are displayed in museum in a manner that visitors could gain knowledge about the religion, art and craft, trade and agriculture and social life of the people who lived thousands years ago in this city.

1- Number of Galleries with details.
Harappa museum have only two galleries which consist of 30 showcases.

2- Brief of the artifacts displayed therein
During the excavations a large number of artifacts recovered which was properly
documented and then exhibited in the museum such as ritual objects, seals, mother goddess,
stone tools, Copper and Bronze objects, terracotta female animal figurines, Shell and ivory objects, Weights, Children toys, Human Skeletons and a large number of other pottery
object.