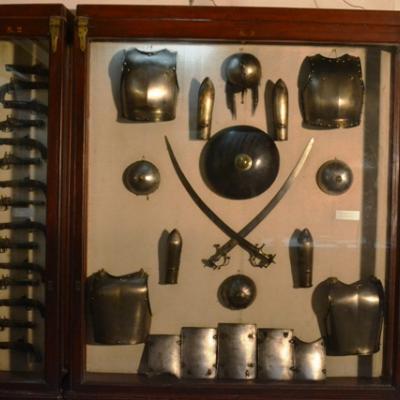 This museum consist of four halls comprises over the arms and weapons of British and Sikh times 18th and 19th centuries. Armory museum was established at Lahore fort in April, 1965.
The first hall house the miniatures paintings, pencil sketch of Sikh rulers and their family members and officers at court.
The second main (Hall Room) exhibits the Swords, Pistols, Guns, Shields, Daggers and other war implements which were used in Englo-Sikh war of 1845-46 and 1848-49 after getting victory in these battles British Annexed Punjab from the Sikh dynasty in 1849.
The third hall depicts the battle scene on Lithographs of Englo-Sikh battles like battle of Alival, Chilianwala Mudki, Ferozshahar and battle of Gujrat. These battle were fought in 1845-46 and 1848-49 AD.
The fourth hall of Armory Museum depicts some arms and battle devises mainly this gallery show the Texidermido horse of Maharaja Ranjit Singh (1780-1839AD) the original head and tail dress of the horse, its saddles is on display, long barrel muskets are also exhibits there.